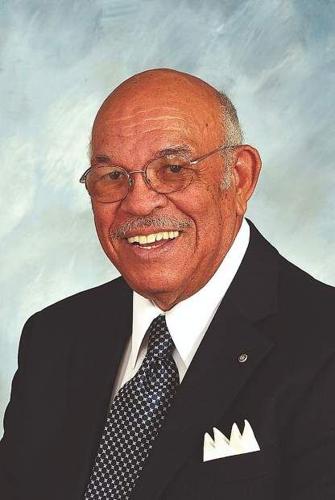 Adams was a distinguished veteran who served his country for over two decades, retiring as a Senior Chief Petty Officer in 1973, a dedicated member of St. John Missionary Baptist Church for over 40 years, and as a Deacon for 39 years until he was honored as Deacon Emeritus in 2017. Adams also led the City Parks and Recreation Commission as chairman for ten years out of his seventeen years on the commission and served for more than ten years on MiraCosta College’s Board of Trustees and while also being a member of the Oceanside Rotary Club. This scholarship honors his name in one of the many cities he made remarkable contributions to, Oceanside.

If you'd like to get more information on scholarships, please contact us. Our scholarship application process is open from January 1, 2023 thru March 31, 2023. We are ONLY accepting online applications. Scholarship recipients must present confirmation of enrollment at a four-year college, community college, graduate school, trade/technical school, or ROP to receive their award.  Confirmation of enrollment must be received by SEPTEMBER 30, 2023.  Scholarship recipients will forfeit award if the deadline is not met. PLEASE NOTE:  Financial Awards will be mailed to awardees within 10 days of receipt of verifiable enrollment confirmation.

1. Do I need to fill out the application and submit a resume?
Yes! An online application is required to receive a scholarship. Prior to submitting your application, check for correct spelling, complete sentences, and ask someone to review it with you.


2. Do I need a transcript to apply for the NCAAWA scholarship?
An official transcript is required and must be uploaded with your application. The transcript MUST be current.


3. I am still in high school.  When can I apply for a scholarship?
Area high school students should apply for the scholarship during their senior year; the year they are graduating. Applications open annually on January 1.


4. Does NCAAWA provide scholarships for continuing education?
Yes. Submit your application each year you meet the qualifications.


5. How much money can be awarded to an applicant?
NCAAWA scholarships depend completely on our availability of funds, so we have no set amount.


7. What if I cannot obtain the courses needed to meet the 12 units required?
The scholarship amount is based upon a full-time load (12 units). If lesser units are taken, the award will be divided according to the equivalent number of units, i.e., 9 units, you will receive 3/4 of the award; 6 units, you will receive 1/2 the award for the semester. The remainder will be distributed in the following semester. Note: Verification from the college showing the unavailability of desired courses will be required.


8. May I apply for the scholarship more than one time?
You may apply for a scholarship as long as you are attending school, are enrolled in the required number of units, and are maintaining a “C” average. Certain scholarships may limited application availability or different GPA requirements.